The Ditali Rigati belong to the very short pasta family and have a tube shape with ridges and a straight edge cut. These pair wonderfully with many different toppings: meats, mushrooms, artichokes, peppers and beans.

The Ditali Ruvidi belong to the very short pasta family and have a tube shape with rough sides and a straight edge cut. This small pasta is suitable for preparation with many different toppings: tomato sauces, pork, beef, pot roast, stew, sausage. The sauces should have a relatively liquid consistency to allow the sauce to gather on the inside of the noodle.

The Sedanini are a popular short noodle in Northern Italy with a thin, ridged tube shape and a straight edge cut. They are excellent to prepare with soups and stews, but can also be enjoyed with light tomato sauces, or tomato sauce with garden vegetables and beans. 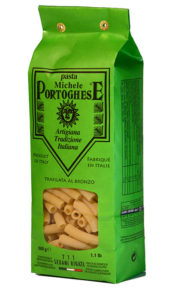 The Sedani Rigati are part of the short pasta family and have a tube shape with ridges and a straight edge cut. These pair well with elaborate sauces such as meat sauces with mushrooms, or sausage, and are also excellent as a noodle for baked pasta.

The Sedani Ruvidi belong to the short pasta family and have a tube shape with rough sides and a straight edge cut. These noodles are great with elaborate sauces such as meat sauces with mushrooms or sausage, and are also excellent when used for baked pasta. 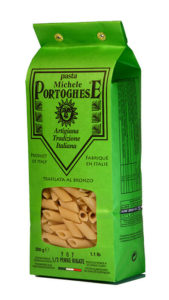 The Mezze Penne Rigate are a member of the large family of Penne Pastas. These are the short tubes with an angled cut. They are ideal for any sauces made with meat or vegetables.

Part of the large family of Penne Pastas, this form is short with an angled cut and has rough edges. The thickness and roughness of this noodle makes it particularly ideal for capturing any seasoning. 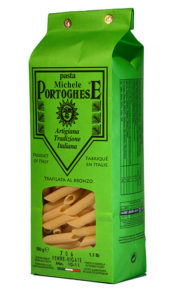 From the short, angular noodle family, the Penne Rigate are perfect for baked pastas or seasoned with meat sauces such as pork or beef. They also go very well with sauces with a vegetable base like bell peppers, zucchini and artichokes. 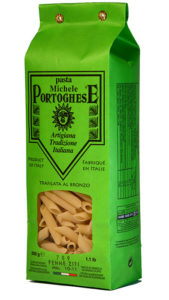 Penne Ziti are originally from the region of Campania and are a member of the short, angle cut pasta family. The ideal dressings for Penne Ziti are meat sauces in general: pork, beef, sausage, braise or stewed and mushrooms.

The Pennette are smaller in diameter than the traditional Penne and are another member of the short, angular cut pasta family. The ideal toppings for this noodle are meat sauces, seafood and garden vegetables.

This particular short pasta form has two deep grooves on either side, perfect to catch every type of sauce. It is very tasty with a truffle pea coulis. 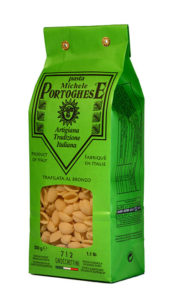 The Gnocchetti Sardi have a short, tapered shape. As the name implies, they originate from the island of Sardinia and are especially tasty when served with ricotta or pecorino cheese. They are also delicious with simple tomato sauces and meat sauces.

Also known as Dischi (or discs) they have a slightly hollowed spiral shape. They are excellent when served with vegetable sauces with bell peppers, zucchini and artichokes.

The Orecchiette, also known as “Strascicati” or “Strascinati”, are a pasta shape typical of cuisine from the region of Puglia. The shape is a round disc with a slightly hollow center. The traditional Pugliese homemade Orecchiette pasta was made with white flour, durum wheat and water. Once in small pieces, they tore the dough with the tip of a knife to obtain a sort of small shell, then pushed back with the tip of the thumb. The traditional Pugliese recipe the Orecchiette are boiled together with broccoli or turnip greens. You can serve with tomato sauce and pecorino or with a base of oil and garlic.

An exclusive form from the traditional Sicilian cuisine, also known as Anelli Siciliani (Sicilian Rings) they are traditionally used in the baked dish known as ‘Timballo’, where they are baked under a pie crust which comes in many popular versions used around the holidays.

The Filini belong to the very small pasta family. They are used for the preparation of soups enriched with croutons or vegetables sliced into thin strips. They can also be combined with soups that are creamy and velvety.

Spedizione GRATIS in tutta Italia per ordini superiori a € 50