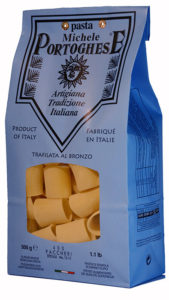 The origin of the Paccheri is disputed between the regions of Campania and Calabria, however, it is impossible to attribute the birthplace to either one or the other. They are part of the large pasta family with a straight edge cut.

“La pacca” which in the Neapolitan dialect translates to “the slap” probably refers to their coarse texture and heavy weight, like a well-aimed slap. The Paccheri are recommended with dense meat sauces that can gather on the inside of the noodle. Alternatively, they can also be served as a baked pasta with a cheesy tomato sauce, even covered with a pie crust. 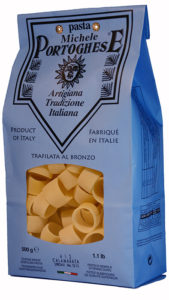 The Calamarata is part of the large pasta family with a straight edge cut and is about half the size of the Paccheri. Its name derives from the shape of the ring calamari to which it resembles. They are best served with seafood sauces: a calamari stew or mixed seafood. 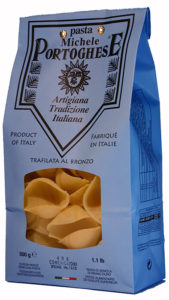 The Conchiglioni are part of the large pasta family. Their dimension and particular shape make them perfect to contain their seasonings which is great for a baked stuffed pasta. 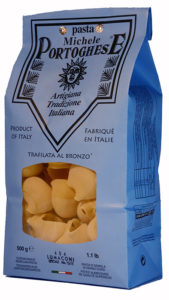 The Lumaconi are part of the large pasta family with a shape like the shell of a striped snail. Similar to the other large pasta forms, they can be prepared with a wide variety of different fillings and styles, for example, a baked pasta covered with a light layer of a tomato sauce and béchamel. 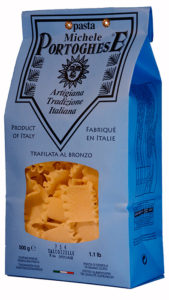 The Taccozzelle, also called Tacconi, originated in Tuscany. They are square in shape with wavy edges and light grooves. This form is perfect for preparing ‘pasta e fagioli’.

The Mafaldine are part of the long pasta family, unique with their wavy edges. The curly pasta, such as Mafaldine, once cooked have a unique consistency that differs from the long, straight pastas. Another peculiarity of this shape is the increased ability to retain the sauce on the noodle compared to the straight, smooth noodles. They are a very versatile pasta recommended with a ragù with ricotta, game meat sauces, any seafood or white sauces with soft cheeses. 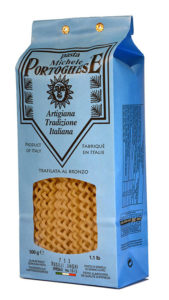 The Fussili Lunghi have a simple spiral form. In ancient times the Fusilli were made by twisting a piece of spaghetti around a knitting needle. The Fussilli Lunghi are traditionally served with meat sauces, but are also well suited for baked pastas. 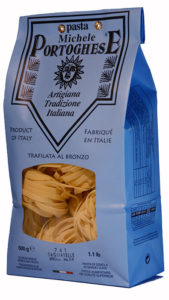 The Tagliatelle belong to the long, flat pasta family. They originate from the Northern Italian regions, like Emilia in particular, and are a fundamental part of the traditional cuisine. These noodles are quite versatile and can be enjoyed in a variety of combinations. One of the best pairings is with a seafood or shellfish base or a white sauce made of soft cheeses and cream. 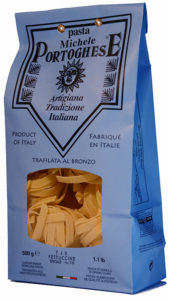 The Fettuccine belong to the long, flat pasta family. The most likely birthplace of Fettuccine is Lazio, where they are the pride of the entire regional cuisine. These noodles are very versatile and can be enjoyed in a variety of combinations, particularly recommended in recipes with a tomato sauce and a meat ragù. They are also excellent when prepared with seafood and/or shellfish. 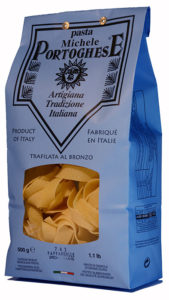 The Papparedelle, originating in Tuscany, are part of the long, flat pasta family. They are excellent when prepared with meat sauces, particularly wild game. They are also recommended with a cheesy tomato sauce or with creamy sauces that distribute well over the entire surface of the noodle.

Spedizione GRATIS in tutta Italia per ordini superiori a € 50